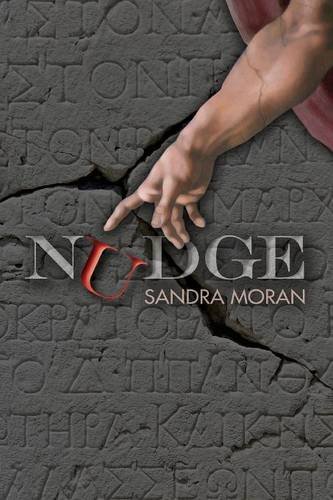 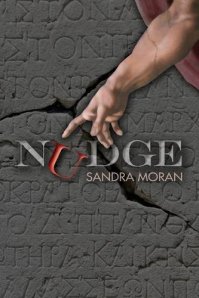 New York advertising executive and lifelong atheist Sarah Sheppard is highly successful, in line for a partnership, and feeling on top of the world. When she’s visited by a mysterious client who offers her a job to write and market a comprehensive addition to the world’s religious texts, she thinks it’s an elaborate joke and turns him down. But God works in mysterious ways and she quickly finds she has no choice but to take the assignment.

Isolated at a remote estate in upstate New York, Sarah joins a group of scholars and theologians to compile The Addendum, but soon discovers that nothing and no one are what they appear to be. As more questions than answers mount up, Sarah has to decide whether to deny her natural skepticism or embrace that illusive idea of faith before she’s nudged onto a path of no return.

This review is long overdue.  I read Nudge (Bedazzled Ink) by Sandra Moran right after it was released.  I sat down then to write a review, but I couldn’t.  Too much was stirring in my mind.  So, I started to read it again.  I read it gradually the second time.  It kept me company while I was going through acupuncture therapy for my back.  The doctor and the assistants would ask me what I was reading and I was very happy to tell them all about it. I’ve recommended it to anyone who will listen to me.  What do I tell people to convince them to read Nudge?  I tell them that it’s well-written and engaging; that it’s thought-provoking; and that it’s necessary.

As with her debut novel, Letters Never Sent (reviewed here), Moran has crafted a nicely written novel.  It’s sharp.  It’s witty.  It’s informative.  Moran blends her knack for academic writing with her talent for storytelling to create a novel that pulls the reader in from page one.  She wastes no time introducing us to Sarah and the dilemma she is about to face – whether or not to work for God.  For the very religious, this would be a tough decision to make.  For an atheist like Sarah…well, you can imagine the skepticism.  Sarah, like many of us, needs to learn about various religions, religious figures, history, culture…it’s mind-boggling.  What Moran does so well is to present her very detailed research to Sarah – and, thus, the reader – in a way that is interesting and accessible.  This isn’t a case of “you better read everything here, whether you like it or not.”  Instead, I wanted to read every word of that research.  It was fascinating.  I think I learned more about world religions from Nudge than I did in the two religion courses I took in college.

As a Christian Catholic, I’m always prepared for something to offend me and my faith.  I don’t look for it.  But I also try to keep myself from being blind-sided.  So, yes, going into my reading of Nudge I was preparing myself mentally to defend my faith.  I didn’t need to.  Moran clearly showed objectivity when discussing various religions and religious figures.  None were better than the others.  All were treated with respect, though Moran didn’t hesitate to show flaws in the people, events, and religions she highlighted.  In doing so, Moran gently nudged me (pun intended) to think and consider.  Does this mean that I now doubt my own faith as a Catholic?  No.  Does it mean that atheists will now become believers and begin practicing a particular religion?  No. But it does mean that the reader will stop and consider possibilities – and not necessarily from a religious perspective.  As I mentioned, Moran clearly did her research.  So, it’s nearly impossible not to re-evaluate perspectives from a cultural and historical perspective.  If nothing else, it certainly opens a discourse on religion and faith.  And that is so important.

At the risk of making a sweeping generalization, we live in a world that is filled with “bad things” – hatred, bigotry, violence, intolerance.  I think it would be easy to argue that “it’s never been worse.”  Now, that, I don’t necessarily believe.  I believe the world has always been this way in cycles.  We just have more immediate access to it today.  But, I digress.  We hear so much about religious intolerance every day – on the TV, on the internet, via social media.  It’s really overwhelming sometimes.  I don’t know about you, but sometimes it makes me want to shut myself in a room, turn off the lights, and cry. But Nudge opens a space for intelligent discussion and debate.  It shows a way toward tolerance and acceptance and respect.  Heck, it posits something that I’ve considered for years – we basically worship the same god…we just have different names.  (Yes, I realize that’s very simplistic…and Nudge is not.)  Moran deftly uses fiction to open an important dialogue.  She is active on the Facebook Group “What Would Sarah Sheppard Do?  Nudge Conversations” and encourages others to be just as active.  All participants are respectful, insightful, open.  Now imagine if religious and political leaders throughout the world were able to be open to this type of respectful discourse.  Seriously.  Imagine it.  How great would that be?

Maybe we should start drop-shipping copies of Nudge to people all around the world.

Just in case I haven’t been clear, this is a book that I highly recommend.  I’ve purchased more than one copy so that I can have it available to loan to others, while still keeping a copy for myself to read.  (Yes, I do go back and read different sections.)  If you haven’t had the opportunity to get your own copy, I suggest that you put it on the top of your list.

Of course, if you ask Spencer P. Moran, he’ll tell you that it was all his idea.