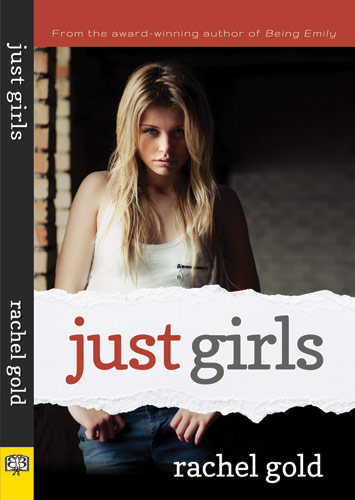 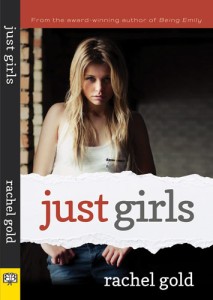 Jess Tucker sticks her neck out for a stranger—the buzz is someone in the dorm is a trans girl. So Tucker says it’s her, even though it’s not, to stop the finger pointing. She was an out lesbian in high school, and she figures she can stare down whatever gets thrown her way in college. It can’t be that bad.

Ella Ramsey is making new friends at Freytag University, playing with on-campus gamers and enjoying her first year, but she’s rocked by the sight of a slur painted on someone else’s door. A slur clearly meant for her, if they’d only known.

I’ve been hoping for the release of this book for over two years.  I read and reviewed Rachel Gold’s debut novel, Being Emily, in June 2012.  Ever since then, I’ve wanted to read “the next book” – whether it be a direct sequel or not.  I wanted more.

Thankfully, my wait is over.  Just Girls (Bella Books) by Rachel Gold is here!  And, in my opinion, it was worth the wait.  Once again, Gold has given us a novel that is full of wonderful, engaging characters; is very nicely written and draws the reader into the story with intelligence and heart; and it is a very timely story with a very important message.

There are a lot of folks roaming through the pages of Just Girls.  Gold does a very nice job of making each character distinct and not overusing them.  Tucker and Ella are the main characters in the story.  Right from our first introduction of each young woman, the reader gets a sense of who these people are and what they are about.  We learn a lot about them at the beginning.  But what I really like is that we keep learning a lot about them throughout the novel.  And we learn right along with Tucker and Ella as they, in turn, learn more about themselves.  We get to experience their first year of college and their struggles right along with them.  And with each struggle, with each situation, I found myself thinking, “what would I have done?”  My response is made manifest in the actions and reactions of the secondary characters in Just Girls.  Nico, Summer, Tesh, Cal, Shen, Johnny – often asked the questions I was asking myself.  These were people I was able to relate to.  I connected with them in ways that made me stop and think – often making me re-evaluate my own perspectives.  Even the portrayals of Lindy and Vivien gave me pause and had me wondering if I’d ever said or done anything similar.  (And if I ever did, I’d like to apologize to the universe now.) Gold has a knack for creating characters who are unique, well-developed, and real. Even if I didn’t like the character, I still liked what Gold did with the character.

I really like Gold’s writing style.  It’s clear, it’s precise, and it’s creative.  As with Being Emily, Gold weaves complex gender and feminist theory into Just Girls.  But she does so in a way that my eyes didn’t gloss over from intense academic vocabulary (which I’m very familiar with – Hello, Judith Butler).  At the same time, it wasn’t so watered-down that it felt condescending (“I’ll use small words so you’ll understand.”)  Gold strikes just the right balance and makes theoretical arguments accessible to the readers, regardless of the readers’ individual experiences with those theories.  As the characters discuss and argue the issues, each does so from her own perspective and level of knowledge.  So, each reader will find at least one voice that makes it all click.  But even with the multitude of “voices” throughout Just Girls, Gold makes it very clear that Ella and Tucker are the main characters.  Each chapter is titled either “Ella” or “Tucker”.  So we know precisely from what perspective  each part of the story is being told.  The point of view flips between first-person for Ella and third-person for Tucker.  While I often find this shift in point of view to be distracting, it works beautifully in Just Girls.

There has been quite a bit of forward movement in the struggle for equality over recent years.  DADT and DOMA were defeated.  Same-sex marriage bans are being struck down as unconstitutional.  Anti-discrimination laws are being put into effect.  But “equality” is still pretty elusive.  It’s even more elusive for those who are transgender.  Bisexuals are often seen as people who “just can’t make up their minds.”  And Heaven help you if you identify as genderqueer.  Gold deftly highlights that there are more “letters” involved in our struggle for equality.  “LGBT” just doesn’t really cover it anymore.  And the “us vs. them” arguments aren’t quite so black and white. Even within our own communities, there is prejudice, bigotry and violence.  The transgendered are still widely ostracized by “real” gay men and lesbians. Bisexuals aren’t always accepted because they may have had intimate relationships with people of the opposite sex….and liked it.  The straight community does not have a market on domestic violence.  And yet….and yet.  Gold gives us hope.  Within these communities there is also inclusivity and understanding; there is a broadening of perspectives.  Yes, there is struggle, but there is hope.  For that hope to have a chance, bridges must be built and crossed.

Callander put her hand on Vivien’s shoulder. “Not everyone has seen the world you’ve seen,” she said. “And not everyone sees the world the way you do.”

“But there’s so much to do,” Vivien protested.

“That’s why we need everyone,” Alisa told her. “And to not fight each other.”

Once again, Gold has offered her readers a rich, thought-provoking novel.  I firmly believe that Being Emily and Just Girls should be required reading in Gender, Women’s Studies, and Queer Studies programs.  (Probably in quite a few other programs, as well.)  Can you imagine the discussions?  I’d love to be a fly on the wall.

There have been some great blog posts published recently in response to the “us vs. them” division within the LGBTQIA community.  I highly recommend taking the time to read them.