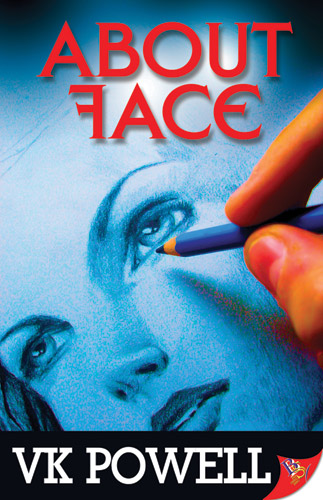 *I was provided a free download of About Face by NetGalley in exchange for an honest review.  Thank you to Bold Strokes Books for affording me this opportunity.* 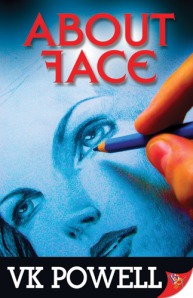 Reclusive forensic artist Macy Sheridan agrees to work one final case she hopes will solve the mystery that’s haunted her for years. The only things blocking her from achieving her goal are a perfect facial reconstruction and Detective Leigh Monroe, a woman who reminds her of the past and challenges her future.

Leigh Monroe has lost her lover, her livelihood, and her home, but she chooses to look on the bright side. What else could go wrong? Then she meets rude, solitary Macy Sheridan. But Leigh discovers that Macy’s façade is a mask, yet as real and untouchable as the forensic reconstructions she so meticulously creates.

Not having read previous novels by VK Powell, I was entering unfamiliar territory when I began reading About Face.  Honestly, that makes me a little nervous.    I’m not big on surprises, you know? Plus, knowing that I had to write a review and/or provide some feedback just increases the anxiety.  What if it’s really not that good?  What if there’s something in the story that just makes me want to close the eBook and not open it again? What if?  What IF?

You see, I don’t like posting a “bad” review.  I don’t mind providing constructive criticism.  I have no problems discussing what works for me and what doesn’t.  But if I can’t find some redeeming quality in the book – something that will allow me to read the novel in it’s entirety, rather than giving up half-way through – then I just don’t want to put that out in the world.  I know there are people who say that I should, to “warn” others.  But I always remember the old saying, “One person’s garbage is another person’s treasure.”  Just because I don’t find redeeming qualities in a book doesn’t mean that others aren’t going to love it. I’d rather share what I deem a treasure.

I needn’t have worried. Powell has offered her readers a romance mixed with some interesting characters, a complex romance, and a bit of mystery. The story is well-written and the mystery doesn’t telegraph the solution.

Powell does a nice job of introducing us to the characters in the novel.  Leigh and Macy are two women who have some definite issues that they are each dealing with.  We learn enough about these issues at the beginning to keep us interested, but we’re not given full backgrounds right up front. We’re given hints now and then.  And with each hint, we learn more about the sources of these issues and how each woman deals with them.  Powell let’s us see things from both Leigh’s and Macy’s points of view.  In doing so, we have insight into how they think and how they cope (or don’t) with various events in their lives.  We’re right there with them – along for the ride – as emotions surface and perspectives change. We feel every sharp turn and steep drop on the roller coaster of their relationship.  And there are sharp turns and steep drops! Leigh and Macy each struggle to figure out what they want.  Just when there’s a glimpse that they might find it in each other, something comes along to bring doubt and distrust to the relationship.  What I really like is that, while Leigh and Macy are on the same roller coaster, they aren’t exactly riding in the same car.  Each approaches the relationship in a different way and, without realizing it, helps the other to traverse each turn and drop.  It’s nicely done.

About Face is written in a style that is at once humorous, emotionally tense, and rich with the technical language found in law enforcement.  Powell moves seamlessly from Leigh spouting self-help and bumper sticker slogans to Macy’s sharp sarcasm.  Everything is appropriate for the situation.  The banter between and among the characters is witty and believable.  The moments of high emotions and personal sharing hit the right levels to bring the reader into those moments. The language and tone each character uses allows the reader to become more fully invested in each person – and it makes each character distinguishable from the others.  (Don’t you hate it when you don’t know who is talking?  Or when someone says something that’s completely out of character?)  The one area that had me a bit shaken was the use of the technical language.  Having been a police officer herself, it’s very clear that Powell knows what she is talking about when it comes to  law enforcement and forensics.  She wields the terminology like a pro.  I, however, am not a pro.  So I often had to re-read certain sections to make sure I wasn’t missing anything important or to visualize the scene.  Regardless of the inaccuracies of procedural shows on TV, I was grateful for shows like “Bones” , “Rizzoli & Isles” and the like, which gave me at least a rudimentary understanding of the terminology.  In other words, at least I had heard those words before. No, I didn’t expect long sections of exposition explaining “dentition” or “mandibular profile.”  But a touch of “layman’s terms” now and again would keep me fully in the story.

Again, Powell puts her own background to use when it comes to the mystery in About Face.  A 16-year-old cold case and a current case dealing with  a teenage boy pepper the story and give us insight into the professional lives of the characters.  More than that, Powell weaves these cases nicely into the building – albeit complicated – relationship between Leigh and Macy.  Additionally, we get additional insights into other characters in the novel and their individual and collective purposes.  First and foremost, About Face is a romance. So the mystery, appropriately, does not take center stage and dominate the novel.  However, Powell does an excellent job of slowly weaving the mystery into the romance.  And she does so in such a way that the reveal at the end is not telegraphed or predictable.  I like that.  I don’t want to be able to figure out that it was “Miss Scarlet, in the kitchen, with the revolver” two-thirds of the way into the story. I didn’t do that here.  When the proverbial bomb was dropped, I was taken by surprise.  While the resolution was not telegraphed or predictable, I was still able to think back over the clues and hints given throughout the story and say, “Aha!  I see it!”

Overall, I’m pleased with my first experience reading Powell’s work.  It’s a well-written, satisfying story with interesting characters, an intriguing mystery, complex relationships, and some steamy sex scenes.  You’ll have to experience those for yourself – don’t expect me to spoil the fun.