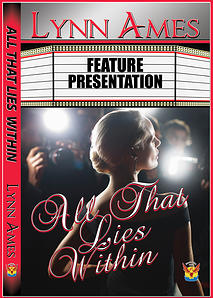 I was having a conversation with Lynn Ames and the subject of reviews came up.  During that chat, we discussed that I had not yet posted a review of one of her books.  Now, mind you, this was not because I didn’t want to.  Nor was it because I read a book and thought it was horrible (I won’t post a review if I can’t find redeeming qualities in the novel).  It was simply because I have SO MANY books sitting here waiting to be read, I just hadn’t gotten to hers yet.  Most of Lynn’s books that I had already read were “older” releases…I read them long ago. Her most recent release, All That Lies Within (Phoenix Rising Press), was one of many in my “to read” pile.   I assured her that her book was in my “short stack” of reading.

(I also promised her that the pun was not intended.)

So, since I was ready to start a new book, I decided to move All That Lies Within to the top of the stack.

For those of you who have read my reviews in the past, you know I’m not that great at summarizing without providing spoilers.  So, in order to stick to my strict “No Spoilers” rule, I will provide you with the information from the back cover:

How far would you go to hide who you really are inside? And what do you do when you find the one person from whom hiding your true self isn’t an option?

Glamorous movie star Dara Thomas has it all—an Oscar nomination, dozens of magazine covers proclaiming her the sexiest woman alive, and people of both sexes clamoring for her attention. She also has a carefully guarded secret life. As Constance Darrow, Dara writes Pulitzer Prize-winning fiction, an outlet that allows her to be so much more than just a pretty face.

Rebecca Minton is a professor of American Literature in love with the work of the mysterious, reclusive author Constance Darrow, with whom she strikes up a correspondence. A chance phrase in a letter leads her to a startling conclusion about the author.

What happens next will change the course of both of their lives forever.

Let me start off by saying that I really enjoyed this novel. (I read it in one sitting – couldn’t put it down.)  It’s a lovely romance and it’s good reading.  I really like Lynn’s writing style. It flows nicely and that makes it easy to read.  It could have been very easy to get “point-of-view whiplash” since the story is told from varying perspectives.  However, the POV was always very clear and very precise.  I appreciate that greatly.

The characters in All That Lies Within are intriguing.  On the one hand, they’re pretty typical archetypes – the famous actress and the brilliant professor.  I mean, really, how many books have we all read that either had an actress or a professor?  Well, I don’t know about you, but I’ve read quite a few.  On the other hand, the way Lynn situates Dara and Rebecca within the story is anything but typical.  Dara isn’t the glamorous star who longs to break free from typecasting so that the world can see her true talent.  On the contrary, it’s very clear that she takes on significantly different roles with each movie.  Instead, her “true self” is found as Constance Darrow – Pulitzer Prize-winning author.  But therein lies the rub – only she and her BFF/Business Manager, Carolyn, know of her secret identity.  In many ways, Rebecca remains the typical academic.  However, her turn in Hollywood is anything but typical.  She’s thrown into circumstances far beyond her experience.  And yet, it’s still her academic skill that keeps her afloat.

I wanted a bit more depth to these characters.  We’re told more about Dara’s life and experiences than we are Rebecca’s.  That was a bit unbalanced for me.  Both of these women were deeply scarred from their childhood experiences and past relationships – I wanted to know more, particularly about Rebecca.  We got to know quite a bit about Dara’s past – how she was treated by her parents, her schoolmates, her teachers – and we got to see closure from those experiences.  However, we don’t learn as much about Rebecca.  I want to know more about her.  I wanted to get under her skin. I also wanted her to be tougher – poor thing cried and ran away a lot.  There were times when this was apropos. There were other times I wanted her to stand her ground and get angry.

In a similar way, I wanted more angst.  Yes, I’m an angst girl.  I want to see multiple obstacles – internal and external – thrown in front of the main characters on their road to happily ever after.  Conflict is essential to all relationships, in my very humble opinion, and I wanted more of it here.  Well, wait, there was plenty of conflict.  I guess what I’m saying is that I didn’t want the conflict to be resolved quite so quickly and easily.  Arguments and misunderstandings were over and done with so swiftly.  Carolyn played such a wonderful role as the “go between” for Dara and Rebecca.  I wanted to see more of that, too. I really liked Carolyn’s character.

This is not to say that I didn’t like the story or how it played out.  Oh no.  I liked it very much.  It is because I liked it so much that I wanted more.  This took place in two worlds I enjoy quite a bit – entertainment and academia.  It was a lot of fun to get some inside perspective.  The “pecking order” in both fields was brought out very nicely, without going into so much technical detail that it was boring.   There could have been a chapter or two dealing solely with academic politics as it related to the situations in the novel.  (Snoresville!) But it wasn’t needed because Lynn did a nice job of outlining the politics via dialogue.

The part of the story that hit me the hardest and was the most real for me was when Dara was with her mother in the hospital.  The scenery and sounds were described in great detail.  Detail, unfortunately, that I did not need to be pulled into those scenes.  It hit awfully close to home and, honestly, was difficult to read. But I’m glad I did read it.

Over all, this really is a very good novel.  Had it not been, I would not have read it in one sitting.  Instead, I would have trudged my way through it over a few days.  It is a nice romance with likable characters.  I really think these characters have more to say and do. There are aspects of them that can still be explored.  I don’t know if they will be, but a girl can hope!

6 comments on “REVIEW: “All That Lies Within” by Lynn Ames”