I met Janet Mason at a GCLS conference in Orlando.  My mother attended with me.  On the first day, we met Janet.  I very clearly remember how wide-eyed she was – just taking everything in!  The biggest standout memory for me, however, was when Janet met Karin Kallmaker.  What a great meeting of two talented women.  We all had to pause so I could take a picture of them together. 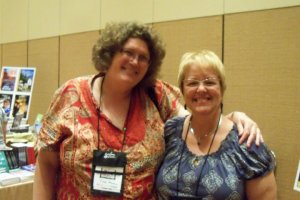 When Carleen contacted me to ask me to write for her blog Frivolous Views, I was not aware that my book Tea Leaves, a memoir of mothers and daughters (Bella Books, 2012) had been nominated for a Goldie in even one category, much less two.  Several years ago, when The Golden Crown conference was held in Orlando, I stumbled across it almost by accident.  Someone asked me to be on a panel and do a reading and off I went. At the time, I was sitting white knuckled in a cubicle at the time, waiting to be laid off from a high stress job, and ordering some low price airline tickets from my desk. (Talk about having a flight response!)

I learned much that weekend and there are many things I remember,  listening to KG McGregor’s compelling keynote, meeting Karin Kallmaker for the first time and having her introduce me as the author of Tea Leaves (My ears almost couldn’t believe it since hearing that was so long in coming. I had written the book after taking care of my terminally ill mother –who died more than 17 years ago. Tea Leaves had very recently been accepted by Bella Books for publication and I was working with Katherine V. Forrest on revising it, primarily adding more information about my long-term lesbian relationship to complement the writing about my relationship with my mother.  Katherine’s advice and direction ultimately made the book much stronger.)

I remember seeing copies of Sinister Wisdom’s When? and Now! issue (number #81 –Fall 2010) with its purple cover) on a table, which leads me to what I remember most vividly. I have a poem in there from my “a woman alone” series which is matched with a poem from my late friend Toni P. Brown from her “the Clementine Poems.”  The work is visually similar — short, succinct poems of similar line length. Toni and I were also very similar. We were both tall, with easy laughter.  Except for the fact that Toni was African American and that I am Caucasian, we could have been mistaken for sisters.

Julie Enszer and Merry Gangemi were editors of that Sinister Wisdom issue.  I had corresponded with Fran Day on a previous issue of Sinister Wisdom (76: the Open Issue — Summer 09) which included an essay about my friendship with Toni who died at the age of 55. Fran Day had passed away after that but I didn’t know that until I attended he Goldie Awards ceremony.

I had come to the conference alone and even though I met many women there (including Carleen and her mother), I was feeling my aloneness acutely.  But as I sat at the Goldie Awards ceremony in the dark, listening to the words of the presenters and award winners, I remember have the strong feeling that we are all connected.  Our lesbian words — that were never meant to be spoken (nonetheless written) — are the coarse strands of silk that connect us.  It takes courage to put our lives on paper and finding that courage makes us all winners.

Here’s a link to my essay about Toni http://amusejanetmason.com/Toni_Brown_commentaryon.htm

and to Fran’s obit http://www.sinisterwisdom.org/node/20

and my author blog about Tea Leaves

Janet Mason is an award-winning writer of fiction, creative nonfiction, and poetry. Her commentary is regularly featured on This Way Out, an international radio syndicate based in Los Angeles and aired on more than 400 radio stations in the U.S. and abroad. She is the author of three chapbooks of poetry, including When I Was Straight. Her work has appeared in The Advocate, American Writing and Chiron Review. She teaches creative writing at Temple University Center City in Philadelphia.