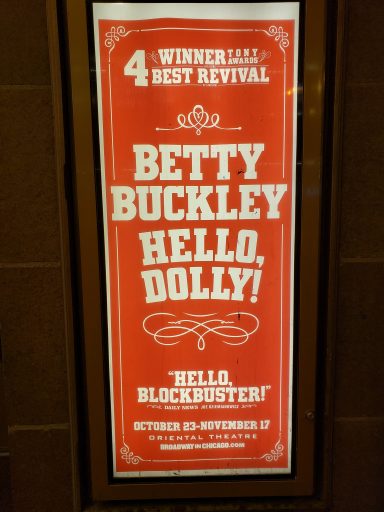 There are two reasons I saw Hello, Dolly! during its Chicago run. The least important of those two is that I’d never seen it on stage before. More importantly, however….BETTY BUCKLEY!!

You see, I’m kind of obsessed with Betty Buckley. It started when I was a kid watching Eight is Enough. Honestly, she was my favorite part of that show. As I got older and started to really develop a love for musical theatre, I experienced her in a whole new way. I mean, she was a revelation for this young girl.

Cut to the late 80s when I was attending college at Texas Christian University. I learned that the fabulous Miss Buckley graduated from TCU in 1968. (I was trolling through old yearbooks in the library and came across a picture of her with the cheerleading squad.) Well, queue aforementioned obsession!

I took my mom to see Betty when she came through Chicago quite a few years ago. Gosh, I can’t remember the exact year, but it was sometime in the 90s. Mom and I went to the stage door after the concert. It was me, Mom, and a lovely group of gay fellows. Betty came out and signed autographs for everyone – taking the time to look everyone in the eye, smile, and say “thank you.” While she was signing my program, I said, “Rah Rah TCU!” She stopped, looked up at me, and said, “YES!!” it was a moment I won’t forget.

So, I guess it goes without saying that I simply had to see Hello, Dolly! As soon as I was able, I bought my ticket. I didn’t even wait for those special sales. I just got my damned ticket! I am so glad I did!

This production was so much more than I had expected. As I said, I’d never seen the production on stage before. I’d only seen the movie. But I was very familiar with the Broadway soundtrack. I had to keep myself from singing along. (I’m sure those sitting nearby were happy about that.)

I’ll start with the obvious here: Betty Buckley was FANTASTIC. Her voice is as strong as it ever was – clear and commanding. When Betty Buckley is singing, you just don’t notice anyone else. (I could listen to this woman sing the phone book and I would be happy.) Her comic timing was SPOT ON. Regardless of whether the moment was obvious or subtle, Betty owned the moment and got the laughs. I’m talking big, bellowing guffaws! At one point, she held the stage for a good 3 minutes with no other action on stage and no dialogue. All of the focus was on Betty. She just nailed it.

The costumes were absolutely stunning. Lots of bright, lively colors peppered the stage. They moved perfectly with the actors, they complemented the dancers. Really, just lovely. And, of course, the iconic red gown and feather headdress during the showstopping “Hello, Dolly!” number was just breathtaking.

My one disappointment for the evening actually  happened after the show. I went to the stage door in hopes that I could simply snap a photo of Betty and say hello. Unfortunately, after waiting for about 45 minutes with two other folks, an ensemble member came out and, when asked, informed us that Betty had already left through another door and wouldn’t be there to sign. Sadness.

Hello, Dolly! is running in Chicago through November 17. So, if you’re in the Chicago area, you can’t go wrong by stopping by the Oriental Theatre to see the show. The tour moves on to Florida and finishes up in San Diego in January. So, if you have the chance, put on your Sunday best and see Hello, Dolly!