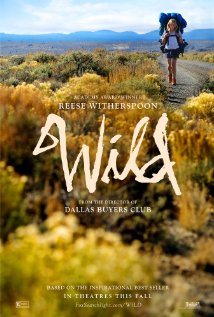 Anyone who has kept up with or read through my blog posts is aware of the close relationship I had with my mother. Her death 2 years ago was devastating. I still find it so strange that I have to visit her at the cemetery, and not just go into the next room to see her. So, whenever questions about “the love of your life” came up in conversations, it was natural that my mother was always the answer.

When I saw the ads and trailers for Wild – and heard the line “My mother was the love of my life” – my heart beat a little faster. I didn’t know if this was a movie I could watch. But I kept seeing that trailer and I kept hearing the buzz and I kept reading interviews with Reese Witherspoon…it wore me down. I needed to see this movie. 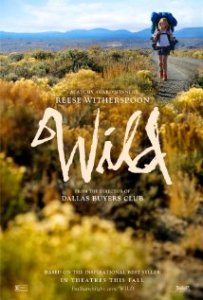 Let me begin by stating that I have not read Wild: From Lost to Found on the Pacific Crest Trail by Cheryl Strayed. In fact, before this movie, I’d never heard of the book or Cheryl Strayed.  So, I went into the theatre with no pre-conceived notions of what I would (or should) be seeing on the screen. I rather like it that way. In fact, I prefer to see a movie based on a book before reading that book. It allows me to watch the movie with a completely open mind and, when I do read the book, the experience becomes that much richer.

Based on the film, I definitely want to read this book.

This is, without a doubt, a multi-layered film. I know I will need to see it again (and again). The story was told beautifully – and a lot of props for that go to the editing. If you’re expecting a film that tells a story in a linear fashion – with a clear beginning, middle, and end – then you are probably going to have some unmet expectations. Instead, the movie begins well into Strayed’s hike along the PCT. The story then unfolds through flashbacks. It’s through these flashbacks that we learn why/how Strayed got to this point and we find out more about Strayed herself.  It’s really beautifully and creatively done.

Wild is a visual feast! I’ve been to a few of the places mentioned in the film. Though, not all of it was filmed at the actual locations. Most recently, during my trip to Portland last summer, my friend and I visited the Bridge of the Gods. It’s so beautiful. That beauty was highlighted spectacularly.

There were a bevy of secondary characters throughout the film. Some had more presence than others. Laura Dern was spectacular as Strayed’s mother, Bobbi. While only 9 years older than Witherspoon, Dern proved her skill as an actor by being completely believable as the parent. I did want to see more of Gaby Hoffman (Aimee) in the film. While most of the other characters – hikers Strayed met on the trail – appropriately flitted in and out of the film (as they would on the trail), Aimee was more of a constant in Strayed’s life. It would have been nice to see a bit more of that interaction. But I believe my desire for that comes from it being such a rich story to begin with…I wanted even more.

I honestly believe that the most credit for how much I loved this film has to go to Reese Witherspoon. I’ve always loved her work. Her earliest films showed a maturity beyond her years. Her Oscar-winning performance in Walk the Line was amazing. But, for me, this performance blew everything else completely out of the water. Witherspoon seemed fully committed to this role and this movie. She gave Strayed a depth that is rarely seen in film these days. Since she was playing a woman who struck out on her own to hike the PCT, Witherspoon had to carry this movie. She did. Completely. If she is not nominated for an Oscar, I will be very surprised. It’s been a while since we’ve seen Witherspoon play a meaty role in a solid movie. While she’s never really been “gone”, I do believe this is a great “comeback”.

As I mentioned, I will be seeing this movie again. I know there are things I missed because it’s just so rich and layered. Each viewing, I’m sure, will reveal more and more. It’s nearly 2 hours long. So, when you add in trailers, you can expect to be in the theatre for a good amount of time. Be prepared for that. And be prepared for the movie to hit you emotionally. For me, obviously, it was my connection to an adult woman who lost her mother far too early. But the skill with which this story was told made it less overwhelming than I expected. In fact, everything sort of crept up on me. Nothing smacked me over the head. While there were teary moments, I didn’t resort to “ugly crying.” Perhaps I will on my second viewing. We’ll see. Overall, it’s simply a riveting, well-told story.