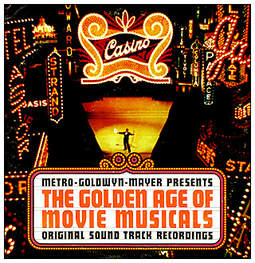 There’s a meme going round Facebook right now that challenges people to post images of movies that have impacted them in some way – one movie per day for 10 days. Just the image. No explanation. I was tagged to do the challenge today, so I posted my first image. As long as I remember to do it each day, I shouldn’t have a problem coming up with a movie a day.

That sort of inspired me to write this post – 10 of my favorite musical performances. No particular order. But I’m taking a bit of an added twist. These aren’t necessarily my favorite movies. Instead, they are my favorite  musical performances from movies. Because, let’s face it…there are some musicals out there that were just mediocre, but there was that ONE performance that made a movie stick in our memories.  That’s what this list is.

Now, this is a good movie. It’s not great, but it’s good. It stars Judy Garland and Gene Kelley, so that lends some credibility to it. I thought the script was weak, though. And, honestly, it could have had better songs. But the reason it stands out for me is one number from Judy Garland. Judy was brought back weeks after principle filming had finished because the producers thought the movie needed a big finish. As good as the number is, it’s a bit incongruous – Judy had lost a significant amount of weight after principle filming, and it’s obvious.

An American in Paris

Here’s another starting Gene Kelley. He’ll show up a lot, because he was amazing. This is a movie that will show up on my favorites lists – I love it. But I really love it for the outstanding ballet at the end of the movie. In total, it’s over 16 minutes long. But I’m just including my favorite scene in the ballet.

Despite the very obvious problems with this show, I still love it. I love it for the talent. I mean, this was a fantastic cast! And it was a deep cast – Jane Powell, Howard Keel, Russ Tamblyn, Julie Newmar, Tommy Rall,
Jacques d’Amboise. They were all so good. The barn raising dance is just spectacular.

This is one of those movies that most people don’t really know about. I wasn’t a huge hit like many of the others that appear here. But it had a great cast: Jane Powell, Debbie Reynolds, Ann Miller, Tony Martin, Russ Tamblyn, Vic Damone. Most of the songs are pretty forgettable. But “Hallelujah”, sung at the end of the movie, has remained with me since I first saw the movie when I was about 12 years old.

Meet Me in St. Louis

I suppose I love this movie for all of the same reasons everyone else loves it. I mean, it’s just a damned good movie. It was also a wonderful piece of propaganda for Americans over their heads in WWII. Released in 1944, Meet Me in St. Louis gave the movie-going public of the United States an escape from the horrors of the war. The movie looks back to a simpler time in our history. (Also note that the “evil” neighbor that all of the kids were afraid of on Halloween was named Mr. Braukoff – I’m sure the German surname was not a coincidence.) And, hey, it’s the movie that gave us “Have Yourself a Merry Little Christmas.” But my favorite is “The Trolley Song.”

When I was in graduate school in Ohio, I met one of my best friends. We’d go for coffee or soda at the student union before class every day. One day, we were walking there with another student – he was between us. We weren’t talking. Then, Tom and I just looked at each other. Without planning and without really knowing what the other was going to do, we each linked an arm with our mutual friend and started singing “The Trolley Song.” At the top of our lungs. That’s when we knew we’d be best friends forever.

I have many more favorites. But if I included them all, this post would take me 3 days to write.

What about you? Do you have a favorite song, dance, or performance from a movie musical? Tell me about it in the comments.

2 comments on “Favorite Performances from Musicals”