So, today was a total wash. I got absolutely nothing accomplished – except for watching 1/2 of the very first season of Gilmore Girls. And napping.

I’m one of those people who has been waiting for the revival – Gilmore Girls: A Year in the Life – to be released on Netflix. That day finally came and I watched all 4 episodes yesterday.

Unlike most of the other fans who were awaiting the release, I’ve never seen all of the previous seven seasons of Gilmore Girls. I bought the entire series on DVD for my mother – she loved the show and watched it religiously. Because of that, I had seen enough episodes over the years to at least know the characters and understand the basics. I was able to watch the revival yesterday and enjoy it. 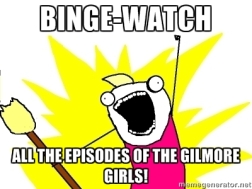 But, I’ve decided that I really want to see the all of the original episodes from the beginning. Thanks to Netflix, I’m able to do that. (I gave the DVDs to my cousin – whose daughter attacked me with a hug on Thanksgiving and thanked me profusely for giving them the DVDs.)

Honestly, there’s something about binge-watching this show that makes me feel closer to my mother. At this time of the year – in between November 10, when she passed away, and her birthday on December 11 – that’s important for me. Don’t get me wrong, I feel close to my mother throughout the year. But this particular stretch of time is the most difficult time. If Gilmore Girls is going to help me, I’m all for it.

Today, I got through nearly half of the first season. Actually, I think I got through more. Quite unfortunately, however, I fell asleep at some point and napped right through a number of episodes. For some reason, I was just super tired today. Ah well. The wonders of modern technology allow me to replay them.

Yeah. That was my day. Gilmore Girls and naps.

Oh. And I cooked the rest of the meat stuffing that I made for Thanksgiving. I got the texture and consistency right. Too bad that didn’t happen on Thursday.