What is it that makes us want to re-read a particular book? Or watch a certain movie over and over again? Or binge watch seasons of shows that we’ve seen a dozen times already?

What is our attraction to “repeats”?

I’ll often rail against Hollywood’s lack of originality. Exactly why is Spiderman getting another reboot? Was it really necessary to do a remake of Clash of the Titans? (I mean, c’mon! How can anyone expect to top a claymation Pegasus and Laurence Olivier as Zeus? Seriously?) How many versions of A Christmas Carol can we possibly watch in a holiday season? Where are the original scripts?!

And yet….I find myself, once again, watching The Holiday. 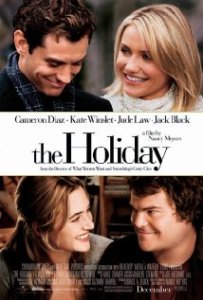 If the movie is on TV or cable, I watch it. It doesn’t matter if I catch it at the beginning, right in the middle, or 5 minutes before the end. I set the remote down and watch. It doesn’t have to be around Christmas, either. If it’s on in June, I’ll watch it.

I do the same with a lot of other movies, too. I’m sure you do as well.

How many of us can quote Clue?

We’re inundated with memes that evoke these films.

I can’t hear someone say “oopsy-daisy” without thinking of Notting Hill. Someone saying “Surely you can’t be serious”  immediately makes me want to respond with, “Of course I’m serious. And don’t call me Shirley.”

In some cases, perhaps, it’s a sense of community. A connection to others. Look at the immense popularity of The Rocky Horror Picture Show and The Sound of Music sing-a-longs. In these cases, large groups of people meet together to share in a common joy. I went to a Buffy the Vampire Slayer sing-a-long (“Once More, With Feeling”) a few years ago and had a tremendously fun time. A theatre full of people who shared my obsession. It was awesome.

Sometimes I wonder why I watch a certain movie over and over. Often while I’m watching the movie. I mean, there are some stinkers out there, but I can’t help watching them! (*ahem* Spice World. Don’t judge.)

For now, though, I’m perfectly content with simply enjoying. Questioning now and then, yes. But quickly putting the questions aside to lose myself for a while in what is familiar and comfortable.

Oh, look! Never Been Kissed is on!